The glass sphere of Frank Keizer

Project leader of Feyenoord City on South:
‘I do not make a plan b’ (Source AD)

ROTTERDAM | Feyenoord City is on track. Under the leadership of civil engineer Frank Keizer (54), an approximately 30-head team works daily on the ambitious plans for a football city on the South, with the renovated Kuip and a brand new stadium as cornerstones. “I do not make a plan b We make Feyenoord City.” MARCEL POTTERS

What they do on South is almost bounded by science fiction. Man and power are bobbing on the development of a part of the city that will only emerge after 2022, so with the circumstances that will prevail in that period of time.

To stare to Feyenoord City in a glass sphere, although project leader Frank Keizer thinks that what is too vague . “The world will look different around that time,” he explains. “And that has its effect on the plans.” Take the parking space, but many people still get to the stadium by car and park their car in the neighborhood, but by 2025 there will be a start of unmanned driving, and by 2030 And you do not have to park an unmanned car at the stadium, which you can send away. “

After the presentation of the place where a future stadium for Feyenoord is to come – on the banks of the Nieuwe Maas – it is quiet again about this high-profile initiative. There is indeed a glimpse impression from the sleeve of the renowned architectural firm OMA, but that is only a small part of the road that is perhaps a marathon long. And the finish line has to be achieved, says the man who already has a lot of large-scale projects worldwide, and is described as a ‘real male spunk’. There is no plan b, it resolutely sounds. ,, If this fails, then Feyenoord withdraws in de Kuip. And will remain there for at least 25 years. “Feyenoord City, or the Strip, in a nutshell: on the one hand comes a Uefa Elite Stadium, for 63,000 spectators. On the other side is the renovated Kuip, with houses, a brewery and sporting entertainment. Among them are houses, perhaps a hotel, catering, shops and leisure activities. “

The initial reactions to the plan were mainly: too ambitious, too complicated, too expensive and unfeasible.
Keizer: “Yes, I can imagine that, if the renovation of that one cockpit does not work, why would Feyenoord City succeed, but in the earlier plans the stadium was the only carrier of the project. shoulders that bear the burden, and the risk for financiers is no longer limited to that one renovated, monumental football complex. “

What about the financing?
“Everyone focuses on that money, but that is only a small part of the problem we are solving, first we have to determine what we want and if there is a market for it.” Look, there is now a successful Pathé cinema On the Veranda, we can put a mega-cinema on the Strip, but who wants to finance it and is that competition desirable? “. Urbanist Riek Bakker compared Feyenoord City with the Kop van Zuid. It was not built in a day. “That’s a very good comparison, and Feyenoord City is also becoming a module of subprojects, sub-developments and part-financing, and it’s up to us to direct the stadium, so that the stadium is there on time, the surrounding infrastructure is up and running. the rest is developing at a good pace, ensuring that the connection between the new stadium and De Kuip is completed on time, and that should be clear if the stadium opens in 2022. “

Then you have to have a big budget on the table anyway. Previously, Feyenoord City was estimated at over a billion euros. An absurd amount?

“No, one billion euros is not an absurd amount, but we are still deciding what we want exactly, just see, it’s not for nothing, that’s clear, and that it will be hundreds of millions, that’s clear. Exactly, it is not yet possible to say.This also has to do with the scale of Feyenoord City, do we take another corner, or do we get a piece off?

“The higher goal is that the Feyenoord club does at speed. The budget must go up. “Yes, you will soon have Feyenoord City, with all those projects.Feyenoord is one of the shareholders, and thus profits from the development gains that are made there.In addition, you have the new stadium, which is much better exploitable than the You get a higher yield, not only in percentages, but also absolutely. “These extras also flow to Feyenoord.”

Will it be possible to get off Feyenoord City without a contribution from the municipality of Rotterdam?

“We are trying to make a financially sound plan, and there is always a relationship between a new stadium and an effort by the municipality of Rotterdam, but whether that will also be a contribution in money, I can not say that yet.” 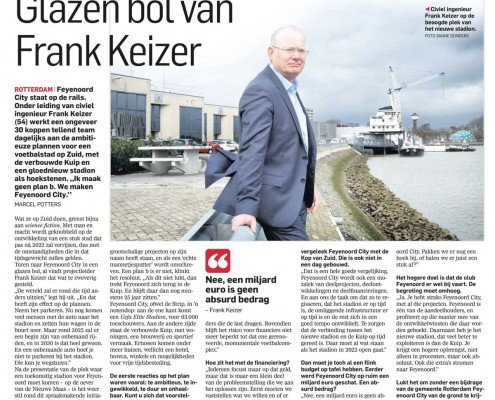